Below you will find your tarot card of today. Use the advice wisely. Remember that you are in control of your own future. We wish you a very happy day!!

The star is the seventeenth card of the tarot deck and symbolizes wisdom and hope. The star says you have to make plans for the future. If you work hard you'll benefit from it in the future. Sometimes a plan doesn't make sense. You might be wondering what you're doing. Remember that it's true meaning will be revealed later. This card is all about having faith in the future. If you take responsibility now, the reward will be great.

If you have a job, you'll be assigned to a task that feels meaningful. An activity that's important for the future! Carry out this task with great responsibility because you'll see that later on you'll benefit from the hard work you deliver now. If you're in search of a job you might feel hope. This feeling will make sure you'll give your best efforts which will eventually lead into success in finding a job. Remember that you have to sow before you can harvest.

You'll find out that your partner has some plans for the future. It can be anything, but think about a life changing event, like marriage, children or a huge trip. At first these plans seem ridiculous. You have to give these plans a change, because you'll find out it'll have a surprisingly good effect on your relationship. Both you and your partner will benefit from it. It's also a very interesting time for single people. A promising encounter is in the offing!


Share this site with your friends on social media! 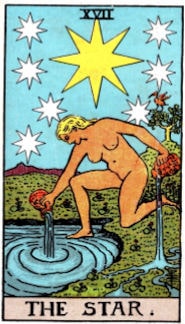 Your life is probably very important to you! Of course you want to know how your life is going to be in the future! Our tarot cards can give you more insight about your life and future life! Get our free tarot card explanations right here!

All our predictions
Home

tarot  tarot card  tarot predictions  tarot reading  major arcana  the fool  the magician  high priestess  the empress  the emperor  the high priest  lovers  chariot  strength  hermit   wheel of fortune  justice  the hanged man  death  temperance  the devil  the tower  star  the moon  the sun  judgement  the world  Get to know all about the tarot cards with our free tarot cards explanations over here! This is the meaning of The Star